Their style is shows a number of influences, including some from the 60s and 70s – I detect hints of Simon & Garfunkel’s 59th Street Bridge Song in the 8th track Come to Visit, some ELO in the background vocals of other tracks (particularly the 9th). There’s also some echoes of the Beatles, obviously so in track 10 The Life of the Liverpool Kid, which quotes some of their lyrics as well as recalling some of their musical style. This track is probably the least typical of the collection, with its slightly quirky style (complete with banjo) and being the only track with a prominent role for a male vocalist. 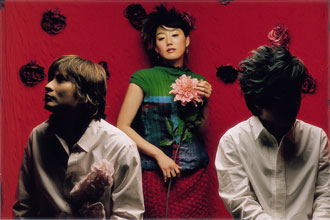 There’s some folkier, more intimate references as well – a flavour of Nick Drake in the third track, Rainy Day, before it grows into more of an anthem. But possibly the most obvious group which comes to mind is the Cardigans (4th , 9th and 11th tracks), both in the style of singing of the excellent lead vocalist, in the instrumentation (particularly the use of the vibrato organ sound), and in the rhythmic breaks. But where the Cardigans can sometimes sound a little bit twee, there’s a slightly more aggressive edge to Loveholic’s guitar sound. Finally, I might be imagining it, but there are shades of John Barry’s twanging sounds from his Persuaders theme from the early 70s in the 6th track, Sad Movie. Altogether a pleasing mixture of styles:

Possibly the weakest song is the opening track, Easy come easy go, annoying noises from the synthesizer, and some imprecise tuning at the bottom of the bass guitar range (I don’t think it’s my speakers misbehaving, though I might be wrong). But from then on I’ve got no complaints. There’s some great toe-tapping numbers, and some tracks with a really melancholy chorus (track 12 – Sad Story). The album ends with a sparsely instrumented acoustic number, an intimate way to finish.