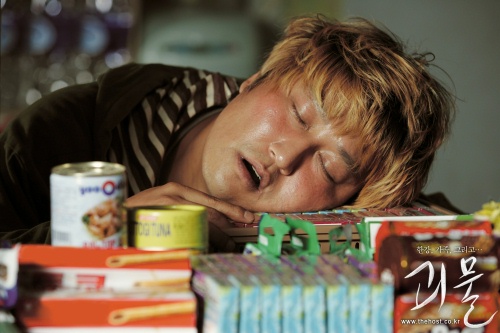 The London debut of the Host is one week away. And it’s still breaking box office records. It’s sold out at the Edinburgh Festival, where Bong Joon-ho will be making a personal appearance, while in Korea, after one week according to the Chosun,

the film brought in some 2.7 million viewers in just four days, setting records by opening on the greatest number of screens (620), the highest number of reservations (99 percent), and as the quickest movie to break the 1 million viewer mark (three days). That knocks the previous record-holders into a cocked hat. The previous record for biggest first week was held by “Typhoon” with 1.81 million tickets sold, for biggest one-day showing “Taegukgi: The Brotherhood of War” with 590,000 viewers. If the trend continues, “The Host” could surpass the 10 million mark in three weeks, which would be faster than the 39 days it took “Taegukgi,” and beat in one month the 12.3 million viewers that “The King and the Clown” saw in its recording-breaking 112-day run.

Three weeks after opening, it’s fastest to make it to 10 million viewers according to Yonhap (around $45 million according to Jase over at koreanfilm.org.uk – apparently number 2 in the world box office):

“But there’s a problem with how it’s going to impact the movie market. It has invaded screens that other movies might have taken.”

Yonhap notes how the recent Locarno success, Don’t Look Back, is being squeezed out by the Host, only being shown on 3 screens. And KOFIC reports how cult director (at least outside Korea) Kim Ki-duk struggles to get an audience at home. Bong has some sympathy:

The Host director BONG Joon-ho said that he was perplexed by the unprecedented success of The Host, but that it was reached fairly.

Time deals with the obsession with physical beauty and the use of plastic surgery to achieve it. KIM didn’t intend to release Time in domestic cinemas, but in the end it was picked up by art film distributor Sponge for a Korean release.

And in case you missed the links in earlier posts, Yonhap reports that the Host is stimulating debate about pollution caused by the US military, and the Chosun also has the story.

I’ve now found a home for my two spare tickets, so no more emails to me please.