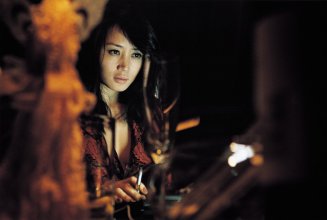 Kim Hye-soo has been voted Korea’s most beautiful face. The picture in the Chosun news story is a fairly low-key affair – but you can find far more glamorous images by googling her name. The image here is a still from the film Hypnotized aka Faceless Beauty.

Whatever, I still think Lee Mi-Sook is tops.

What puzzles me more though is the following quote from the Chosun article:

No matter what kind of clothes she has on, she speaks in a straightforward manner.

Does she speak in convoluted sentences when she’s in the bath?

Top star Choi Ji-woo has been selected by 100 movie industry insiders as the country’s most beautiful actress in the 2006 Timeless Beauty Awards sponsored by cosmetics maker Christian Dior. The awards, which were based on surveys of 100 movie industry insiders, seek to raise the status of Korean actresses and encourage their passion for the craft.

Again, from the Chosun Ilbo.

4 thoughts on “Korea’s most beautiful face”